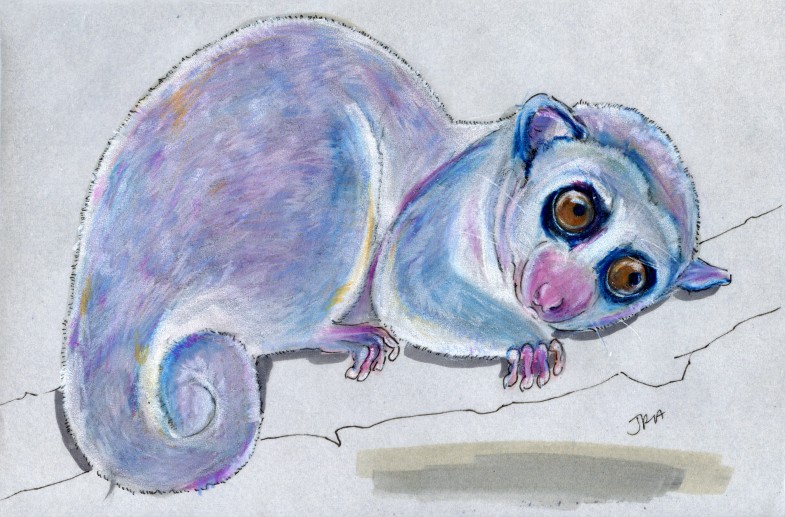 Well, I originally picked this lemur for Hibernators Week because I was under the impression that it was an estivator (see Sunday’s post if you’re wondering what I’m talking about). My beloved but flawed Ivan T. Sanderson told me that, as did Animal Diversity Web. But from what I can tell, that’s not necessarily correct. These Malagasy lemurs go into torpor between March and November…which is winter in the southern hemisphere. It’s rather hemisphericentric of us to call that estivation, isn’t it? Estivation can also refer to torpor during a hot or dry season, so maybe it’s not technically wrong, but it certainly is etymologically. So instead of an estivator, here’s a torpid primate for you.

But the fact that the fat-tailed dwarf lemur is a torpid primate is extraordinary enough, it turns out. This guy is one of only two primate species that enter into seasonal torpid periods, and our friend here is the only primate that is torpid for such a long period. And that fat tail of his? It’s literally a fat tail, where the fat-tailed dwarf lemur stores the fat reserves that get it through its torpid season. And it gets really fat, more so than I showed here.

These lemurs feast on fruit, flowers, nectar, pollen, and the occasional insect or two. They may be responsible for pollinating some of the plants in their Malagasy home, and the fact that they mark the branches they’re traveling on with their feces helps create a fecund (I just looked it up, and feces and fecund do not come from the same root at all—weird, huh?) environment for parasite plants to grow on the trees. During Madagascar’s wet season, fat-tailed dwarf lemurs spend their nights eating up to get those tails nice and plump while they can. When it gets dry, they curl up in little balls and drift off into torpidity.

A word about Madagascar. I’m sorry to say that the country is in turmoil right now, and demonstrations have killed about a hundred people in the past few weeks. Today, the president of Madagascar fired the mayor of the nation’s capital, Antananarivo, after the mayor announced that he was now going to be in charge of the country. It’s all pretty awful and unfortunate. Madagascar is one of the most special and important places on earth, biologically, and is plagued by poverty, deforestation, and violent political upheaval. I wish all the Malagasy people and animals well right now. Here is a New York Times article from today about the situation.

And now a quick word about lemurs. You might like to watch this short video of the director of Duke University’s Lemur Center talking about why she thinks it’s irresponsible of scientists to keep “discovering” new lemur species, a state of affairs that obviously has an effect on the Daily Mammal. I regret that I didn’t get the chance to go to the Lemur Center when I had occasion to travel to North Carolina, and I hope I will get to visit someday. Of course, I also long to visit Madagascar.