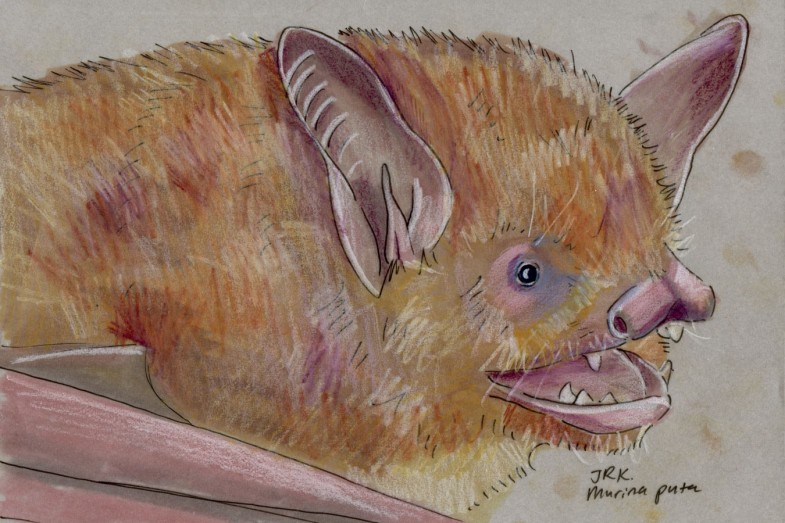 Because I’m happy that the Daily Mammal Facebook page reached a double-digit number of likers last week, I’m drawing a mammal from every country one of those likers lives in. Representing Taiwan (and the fourth continent we’ve visited this week), home of one person who likes the Daily Mammal on Facebook, is the Taiwan tube-nosed bat. It lives only in Taiwan; in fact, it lives only in the forests of the mountains of the interior of Taiwan. Some scientists think, though, that it’s actually the same species as M. huttoni, Hutton’s tube-nosed bat, which lives in China and southeast Asia, but not Taiwan.

(I had a moment of panic/exhilaration earlier today, driving on the freeway, when I realized that this project will never end,  and not only because I’m doing it so slowly. Even if I actually did draw a mammal a day and get through the 5,000-whatever of them in 15 years, they’d just keep coming. I always knew that taxonomy is a living thing, that what defines a particular species can change, new species can be discovered, old species can be split, but I never thought about what it meant to me before. And what it means to me is that I have to draw mammals until the day I die.)

Murina puta was named in 1924 by Kyukichi Kishida, who was better known as an arachnologist (PDF). Assuming that it is a separate species, the Taiwan tube-nosed bat is considered near threatened because its range is so small and affected by deforestation. Luckily, the IUCN informs us, this threat seems to be decreasing. Good job, little bat.

And that’s about all I can find to tell you about this fellow. I do wonder about its scientific name. Murina means mouselike, but what about puta? I’ll tell you from recent (just now) experience that one thing you probably don’t want to Google is “Latin puta,” but Google Translate does say that puta means “for example” in Latin. I suppose that could be it, or maybe it’s a transliteration of something in Chinese. If you know, please tell me.