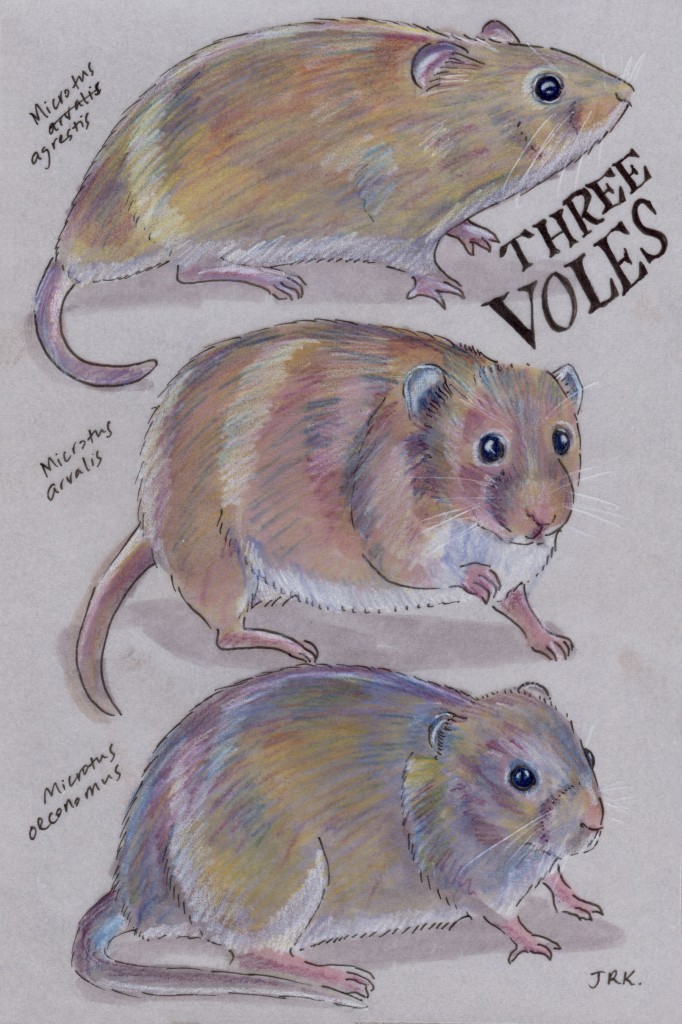 I’m continuing my appreciation of everyone who has liked the Daily Mammal on Facebook with a look at mammals from another of their countries. If you’re on Facebook, liking the Daily Mammal is a good way to keep up with when I’m actually drawing mammals since we all know it ain’t daily.

This time, we visit the Netherlands and get acquainted with three little voles. At the top is Microtus agrestis, the field vole or short-tailed vole, which is a very widespread little fellow whom the IUCN ranks as being of least concern. Good for you, M. agrestis! Besides the Netherlands, it lives throughout most of Europe, except Iceland, Ireland, and the southernmost part of the continent, and into Siberia and China. It eats grasses and other plants, and in the winter it gnaws on bark. As they move about, field voles mark their paths with urine, which helps them navigate and communicate with each other. Unfortunately but fascinatingly, birds of prey like kestrels, which can see ultraviolet light, use these urine trails to find the tasty little voles and snap them right up.

The middle vole above is Microtus arvalis, the common vole, which is also of least concern according to the IUCN. It’s also widespread, with a similar range through most of Europe, other than the southern part, Scandinavia, Iceland, and the British Isles. In the Netherlands, it lives in dikes, as well as the usual grassy places it favors throughout its range. It’s an important food source for many predators in Europe. It mostly eats grass, and it’s considered a pest in some agricultural areas.

At the bottom is Microtus oeconomus, also known as the tundra vole or root vole. This is the one that’s most relevant to our visit to the Netherlands. One subspecies of the root vole, M. o. arenicola, is found only in the Netherlands. It’s the only vertebrate endemic to the country, in fact. Also of least concern in terms of endangerment, Microtus oeconomus in general has the widest range of these three species, living not only in Europe and Asia but also in North America, where it can be found in Alaska and Canada. The population in the Netherlands is a relict one from the Ice Age. In biology, relict refers to a remnant of a species that was once more widespread but is now in an isolated area. If you look at this map of the vole’s range, you can see that the Netherlands population is in fact isolated from the main area where the vole lives, as are populations in Norway, Hungary, and Finland.