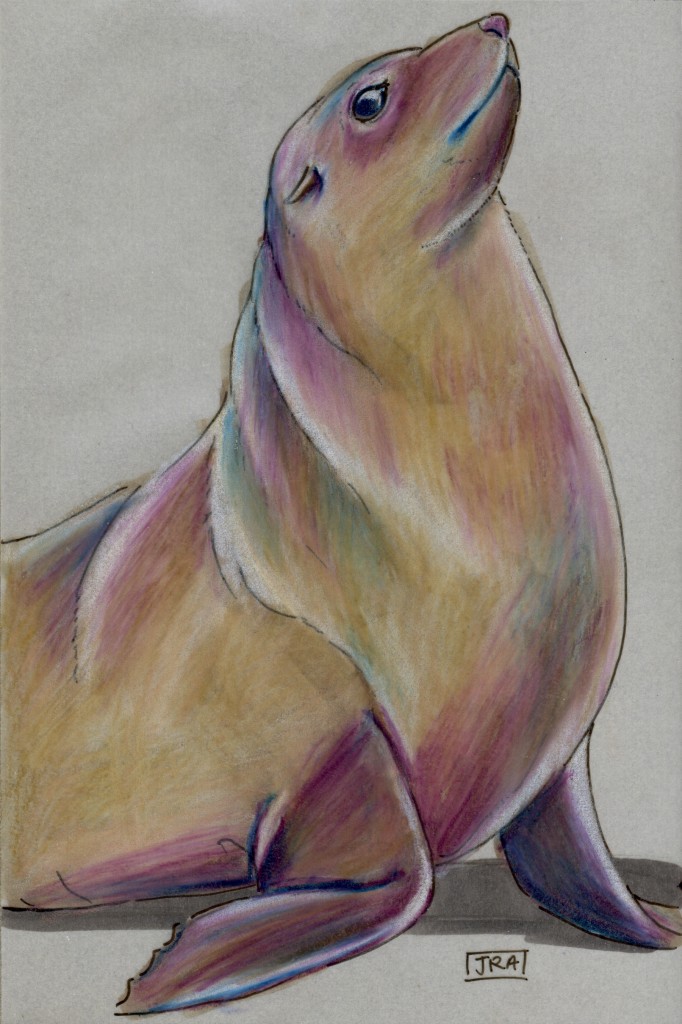 Daily Mammal Now is an occasional Daily Mammal feature in which we meet a topically newsy mammal that I hadn’t previously drawn. Now, let’s meet the Cape fur seal, or more precisely, the Afro-Australian fur seal, of which the Cape fur seal is a subspecies. Afro-Australian seals live, unsurprisingly, off the coasts of Africa and Australia, specifically southwestern Africa and southern Australia. They’re called fur seals because their fur has been used to make coats and such. Baby fur seals have especially prized fur. The genitalia of male seals is sometimes used as an aphrodisiac in traditional medicine.

The largest Cape fur seal colony is on the coast of Namibia. Every year, the Namibian government allows seal hunts. This year the seal season runs from July 1 until November 15. The government is allowing hunters to club 85,000 baby seals and 5,000 adult males. The hunt takes place in relative secrecy so as not to attract attention or scare people.

Namibia is one of only five countries that still allow seal hunts. There is some disagreement among experts about the humaneness of clubbing seals; some maintain that done correctly, it’s more humane than shooting. But because of the perceived cruelty, seal products have long been banned in the United States and other countries, and beginning in 2010, they’ll be illegal in the European Union, too (with the exception of those created by subsistence hunting on the part of native populations).

This year’s Namibian seal hunt has been in the news the past couple of weeks because a South African organization, Seal Alert-SA, has been trying to buy out the only company that deals in Namibian seal pelts. (Coats made by the company supposedly fetch up to US$110,000.) With animal welfare activists claiming that the seal hunt hasn’t started because of the pending deal and the Namibian government saying that it has, it’s unclear what exactly is going on.