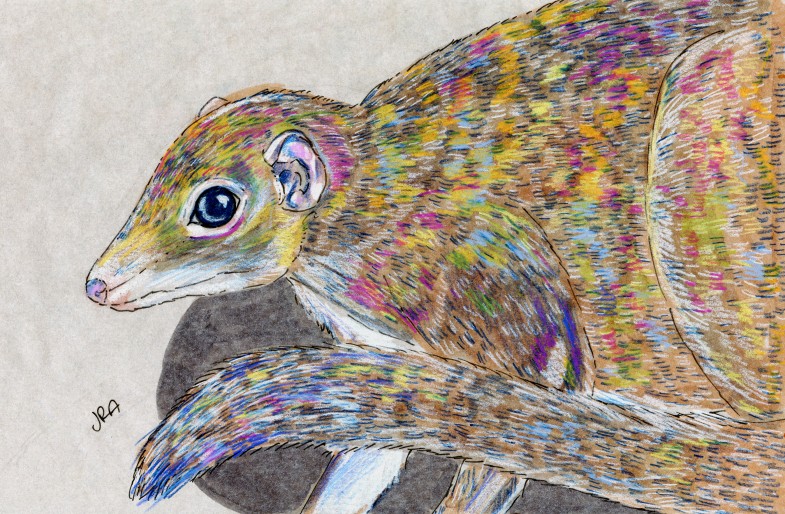 Common treeshrews live in the rain forests of Thailand, Sumatra, Java, and thereabouts. Their generic name, Tupaia, comes from a Malayan word that means squirrel. They have sharp claws and little ears and they rustle around in the trees, darting about looking for insects and leaves to gobble up. The treeshrews’ place in the tree of life has been controversial; at times they’ve been placed in the Primates order. But the 20 treeshrew species are currently believed to be in their own order, Scandentia, which means we can mark one more order off the list!

Animal Diversity Web has some critical things to say about the common treeshrew’s child-rearing techniques. The male of a monogamous treeshrew couple makes two nests for the family: one master bedroom for the parents and a separate suite for the babies. And the mother treeshrew neglects her offspring as much as she can without their actually dying. She goes to their nest only once every two days and nurses them for only 10 or 15 minutes at a time! In fact, if you add up all the time a mother treeshrew spends with her children while they’re in the nest, it comes to only an hour and a half! It’s so bad that treeshrew parents wouldn’t even be able to identify their own offspring if they didn’t mark their babies with the scents they produce from glands in their sternum and abdomen.

I don’t mean to be judgmental, but maybe someone should call child protective services.